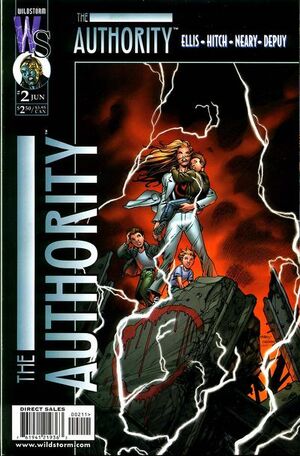 Appearing in "The Circle (Part II of IV)"

Plot Synopsis for "The Circle (Part II of IV)"

In London, the Authority prepares to take on a large group of Gamorran clones. The Engineer links the team together with Radio-telepathy, and the Authority attacks. Swift and the Engineer attack from the sky while Apollo, the Midnighter and Jack Hawksmoor fight on the ground. The Doctor uses his magic to box in the terrorists, so they can't escape deeper into the city. The Authority pushes most of them into the River Thames, where Jenny Sparks promptly electrocutes them. The Midnighter saves a child from one of the invaders while Apollo helps out Hawksmoor. Apollo chases after an escaping terrorist, against the wishes of Jenny Sparks.

On Gamorra Island, the wounded attackers pile in. Kaizen decides to draw his force field, the Curtains, over his country. The man Apollo was chasing hits it and explodes. The Doctor saves Apollo from the same fate. The Authority returns to The Carrier to recuperate from the battle.

Apollo dislikes not being able to get through Gamorra's Curtains. The Authority offers help to London while they attempt to discover Gamorra's next target.

Retrieved from "https://imagecomics.fandom.com/wiki/The_Authority_Vol_1_2?oldid=26262"
Community content is available under CC-BY-SA unless otherwise noted.