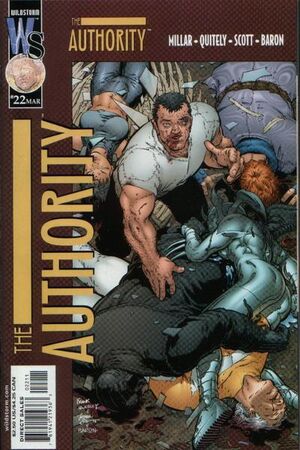 Appearing in "Brave New World: Part One of Four"

Plot Synopsis for "Brave New World: Part One of Four"

In the beginning of this issue, a group of seven unknown people are walking towards a scuttled Carrier in Antarctica in which one of them mentioned that it once belong to the "original" Authority.

One week ago. Jack Hawksmoor is interviewed on the Carrier concerning on his team's recent actions on interfering the international world. Hawksmoor reason The Authority's cause is to save lives even if they interfere governments who would place lives at risk. He ends his discussion with his concerns on big corporations and their powerful influence in politics, particularly with the newly installed American President who is worrisome of The Authority.

Meanwhile, Angela Spica and Swift looks over Jenny Quantum as the two talks about Apollo and Midnighter's upcoming wedding and their adoption of Jenny. Angie then notice something weird happening on the radiotelepathy.

At the Carrier's Junction Room, Apollo and Midnighter arrives back on the shift-ship and finds a pizza delivery girl who is looking for The Doctor. As Apollo intends to pay her to cover The Doctor's expense, the delivery girl suddenly convulse and gave a sudden "birth", which kills her, and a monstrous being emerges and blast Apollo in the head. The monster then viciously attack and subdues Midnighter, whom the intruder introduce himself as Seth Cowie before breaking Midnighter's neck. Seth then leave soon systematically seemingly kills The Doctor, Swift, and The Engineer, before finally confronting Jack Hawksmoor in which Seth kills the news crew. As Seth prepares to finish off Jenny Quantum, he finds a still alive Midnighter with Jenny and the two escape on a motorcycle and into the Junction Room.

A agitated Seth contact his handlers on the whereabouts of Midnighter and Jenny in which they tell him that they last location they went was an Air Force base in San Diego. Midnighter pilots a fighter jet and rams it into Seth, and sending both of them into the Carrier's engine room, creating a large explosion which engulf them. The destruction causes the Carrier to lose its orbit and crash lands into Antarctica.

In the present, the seven people group are reveal to be a "new" Authority that is appointed by G7 nations, who orchestrated in removing the "old" Authority and creating this new team to further their interests. This G7 Authority takes over the Carrier and their leader, The Colonel, have the world to know "who's in charge again."

Retrieved from "https://imagecomics.fandom.com/wiki/The_Authority_Vol_1_22?oldid=33304"
Community content is available under CC-BY-SA unless otherwise noted.