"Transfer of Power (Part I of IV)" 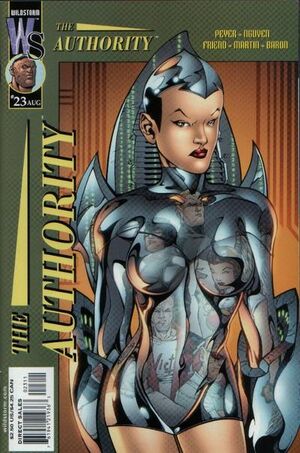 Appearing in "Transfer of Power (Part I of IV)"

Plot Synopsis for "Transfer of Power (Part I of IV)"

Having acquiring the Carrier, the Surgeon, Street, Late Call and Teuton surprisingly discover the Southeast Asian refugees, in which many of them are dead and leaving few alive due to the past recent battle between Seth Cowie and Midnighter that caused the Carrier to fall from orbit and crashing into the Antarctic. As the Carrier, pilot by Rush, travels through the realm of Re-Space, the Colonel is in contact with his superiors, who pressure him into having his team in exploring the realms and realities of natural resources, causing him to furiously burn his headset and throwing the melted remains into Rush's face for trying to calm him. He is then contacted by Teuton informing him of the dead refugees. The Colonel then callously decides to order Teuton and the group to get rid of the dead refugees (including those that are alive) by having them thrown overboard into Re-Space. With the combined efforts of the Surgeon and Machine, they dispose the refugees.

After having dispose the refugees, the G-7 Authority assemble in which the Colonel "celebrate" their first "secret" atrocity. However, Teuton is upset of what they have done, but the Colonel assure him that the refugees are not worth to cry over and they have not contribute anything for society. The team then watches a television show Powers That Be featuring their interviews and the cover-up of the original Authority's demise as being the cause of being intoxicated and crashing their Carrier into killing themselves. As the G-7 Authority laugh and enjoy their status, Rush grimly informs the team that she received a phone call from the undersecretary of the U.S. State Department who question if they knew about the Asian refugees, leaving the entire team staring in dead silence.

Meanwhile, at the White House in Washington D.C., many of the G-7 nations representatives celebrate their fill in installing the new Authority. Suddenly, the White House is transformed into a shanty tent and the people inside are impoverished, resembling to people living in third world nations.

Retrieved from "https://imagecomics.fandom.com/wiki/The_Authority_Vol_1_23?oldid=33305"
Community content is available under CC-BY-SA unless otherwise noted.