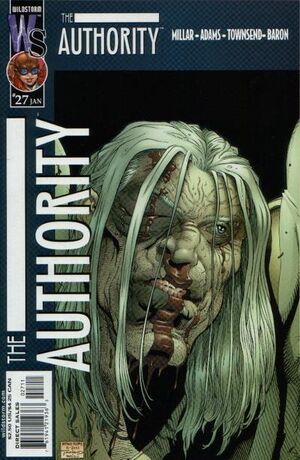 The people you pissed off were hardly going to be satisfied with a bullet in your heads.

As the G7 Authority settles into their new jobs, the fate of the original Authority is revealed, and it's much worse than mere death. Apollo has been given to Last Call as a punching bag; the Doctor has been reduced to an action figure while the Surgeon opens up the Garden of Ancestral Memory to franchise developers; Swift and Engineer have been brainwashed into abused wives; Jack Hawksmoor has been thrown out onto the street, and is a homeless beggar without his powers; and Midnighter is supposedly dead. Unfortunately for the G7 Authority, though, nobody (including Seth Cowie) managed to find the Midnighter's corpse... but, the last untouched Authority member has been living in hiding with Jenny Quarx as he prepares to battle the G-7 Authority and those who wronged him and his team.

Retrieved from "https://imagecomics.fandom.com/wiki/The_Authority_Vol_1_27?oldid=33319"
Community content is available under CC-BY-SA unless otherwise noted.