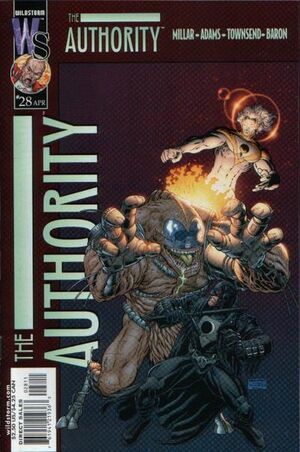 Call the President. Tell him to get that ugly monstrosity Seth up here pronto. The Midnighter's back.

The Midnighter returns to the Carrier and exacts a very bloody revenge on the G7 Authority.

In the control room of the Carrier, Rush and the Colonel immediately has a argument and are close to fighting each other until the Surgeon informs them that Street has been killed, by having been run over by a motorcycle driven by Midnighter. In the Carrier's gym, Teuton is beating Apollo and admitting that he is jealous in not having the way that Apollo and Midnighter have a relationship and suggest of having a sexual orientation with Apollo. However, as he said this Teuton is kill from behind by Midnighter. After dumping Street's body off the Carrier, the remaining G-7 Authority gather and are reluctant in facing Midnighter as they bicker. However, Seth Cowie travels into their midst through a self-made portal and menacingly assure them that he will fight Midnighter, but only he himself will kill him. Late Call and Machine then search for Teuton in the gym. Last Call finds Apollo and mocking ask him to light his cigarette, in which Apollo burst his head into flames right in front of Machine's eyes. The other G-7 Authority suddenly hears a radiotelepathic scream, and Rush and the Surgeon are kill after the lights went out. Surprised, the Colonel prepares to fight Midnighter and is immediately kick by him and instantly kill as Midnighter stomps his foot on the Colonel's neck. After killing the Colonel, Seth greets Midnighter from behind.

In New York City, the members of the G-7 nations talk about Seth Cowie and concern of ridding him and mentioning about a "off button" place on him. Unbeknown to them, Swift, having been free of her brainwashing, is overhearing every word of it.

Back on the Carrier, Apollo has kill Machine by melting her entire face, and sees a badly wounded Midnighter with his heart ripped out and rushes to his side. Apollo then sees Seth along with a upset Jenny Quantum.

Retrieved from "https://imagecomics.fandom.com/wiki/The_Authority_Vol_1_28?oldid=33320"
Community content is available under CC-BY-SA unless otherwise noted.