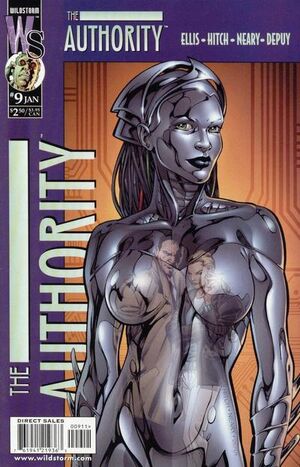 Twentieth century girl. It's been a long strange ride.

Appearing in "Outer Dark (Part I of IV)"

Plot Synopsis for "Outer Dark (Part I of IV)"

It is December 29, 1999 as the New Year is within three days. On the Carrier, Jenny Sparks worryingly checks herself in her bathroom and gives herself a toast for the long century she has experienced.

Somewhere 6.8 billion miles from Earth, the Voyager I satellite is suddenly destroyed by fasts unknown objects.

Meanwhile in the Garden of Ancestral Memory, Jeroen Thornedike tells his predecessor that something old is coming to Earth, which the thing recognized the planet before.

Above Earth, the space shuttle Endeavour is attacked and destroyed by the same objects that attack the Voyager, which reveal to be giant space parasites.

Some of these parasites enter Earth and lands in Central Africa. From where they land, the parasites began to converge and reproduce.

Meanwhile in New York City, Jack Hawksmoor visits Angela Spica's apartment home. Angela suddenly changes back to the Engineer as she detect an environmental change on Earth. The Engineer and Hawksmoor prepares to head back to the Carrier to inform the Authority some grave news.

From all over the world people began to see something visibly appearing on Earth's moon. On the moon, large tentacles sprout out from its surface.

Back in the Garden of Ancestral Memory, Jeroen learns from the past Doctors that humanity do not own the Earth.

On the Carrier, Jack and Angela report to Jenny Sparks of what Angela detected. Jenny then contact Jeroen to relay this information which Jeroen's predecessor states that Earth's original owners have come back. Jenny, Angie and Jack travels to the Garden and learns from a overwhelmed Jeroen that the owners are preparing to "shell" Tokyo, Japan. Before going unconscious, Jeroen tells Jenny that he knows something about her.

On the moon, the parasites launches multiple projectiles containing their ilk to Earth.

Retrieved from "https://imagecomics.fandom.com/wiki/The_Authority_Vol_1_9?oldid=33298"
Community content is available under CC-BY-SA unless otherwise noted.