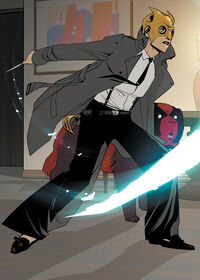 The Brand was a Freelancer. The Brand was hired by Landfallian secret intelligence to silence two journalists, Upsher and Doff, who were researching the Alana and Marko story for a publication called The Hebdomadal.[1]

The Brand surprised them in their bed, accompanied by Sweet Boy. She has them poisoned with "Embargon" by Sweet Boy and tells them they can live for now. But if they ever speak of the story the poison will take effect and kill them.[2]

Upon arriving, The Brand helped the group battle several dragons. However, they all turned out to be female. Sophie soon recommended they attempt to use the translation pendent to communicate with the dragons. They were then pointed to a cave where a larger and meaner male dragon lived.[4] The Brand recommended she forge forward while the others stay behind. However, Sophie snuck down and found herself in immediate danger when the male dragon discovered her presence. The Brand rushed to save her by distracting the dragon and was bitten in half in the process.[5]

Her brother, The Will, later recovers, but becomes depressed upon hearing of his sister's untimely death.[6] Later, he uses Heroine to envision seeing his old lover, The Stalk. Soon, the figment of The Stalk becomes that of The Brand. She tells the Will to reunite with Gwen, whom he pushed away after the Brand's death.[7]

Retrieved from "https://imagecomics.fandom.com/wiki/The_Brand_(Saga)?oldid=60213"
Community content is available under CC-BY-SA unless otherwise noted.