Start a Wiki
The Confessor 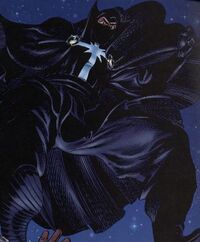 The Confessor is a character in the comic book series Astro City. Created by writer Kurt Busiek and artists Brent Anderson and Alex Ross, the Confessor was a Roman Catholic priest who fell victim to temptation during construction of a cathedral in 19th century Astro City. He was seduced by a vampire, who bit him, causing his transformation. As penance, he fought crime in Astro City, eventually constructing the identity of a religious-themed costumed hero. Towards the climax of his career he began mentoring a sidekick, Altar Boy, who discovered his vampiric nature. The Confessor sacrificed his identity and life to expose masquerading alien invaders, but posthumously was nonetheless falsely blamed for a string of unrelated murders. The mantle of The Confessor was then taken up by Altar Boy.

Staying inside the church during daytime, the Confessor appears only at night, possessing the regular vampiric aversion to sunlight. He is almost always seen wearing an all-black costume with a large black cape, a high collar, and usually a ninja-esque mask over his face. On his chest there is a large, shining cross, which causes him sufficient pain to prevent his temptation to drink blood, and remind him of his mission. Although the original Confessor had traditional vampiric weaknesses, and was thus defeated by traditional methods (i.e. crucifixes, holy water, and a stake), his successor Altar Boy, not being a vampire, is immune to these methods, to his great advantage when fighting enemies who mistakenly view him as a vampire.

The Confessor in Pop Culture

Retrieved from "https://imagecomics.fandom.com/wiki/The_Confessor?oldid=64308"
Community content is available under CC-BY-SA unless otherwise noted.