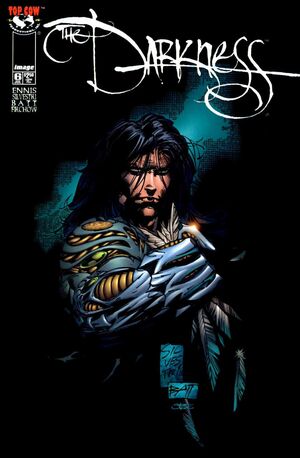 You were the only good in my life, Jenny.

Appearing in "End of an Era"

Plot Synopsis for "End of an Era"

Jackie meets up with both Sonatine and the Angelus in his attempt to rescue Jenny. With some help from Wenders, who he's forced into working as a double agent for both himself and Sonatine, Estacado's able to gain the advantage of the cover of darkness and defeats this incarnation of the Angelus. Jenny herself is also able to escape from Sonatine, but leaves the city afterwards as she realizes Jackie's life is too dangerous for her to be involved in.

Retrieved from "https://imagecomics.fandom.com/wiki/The_Darkness_Vol_1_6?oldid=53670"
Community content is available under CC-BY-SA unless otherwise noted.