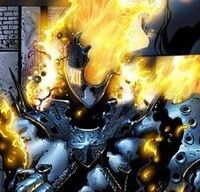 I'M GONNA RIP YOUR GODDAMNED ENTRAILS OUT THROUGHT YOUR ASS HELLSPAWN, AND THIS TIME I'M GONNA EAT THEM!!! YOU HEAR ME YOU SACK OF SHIT??!!!

The Disciple first appears in Spawn #150 He was Heaven's first and greatest soldier in their war against the forces of Hell His origins are unknown but his power is great. He appears to be the archetype and prototype for the The Reedeemer, and is definitely a formidable enemy for the Hellspawns. His appearance is that of a large, armored warrior. His black suit is covered in a silver armor and he bears a mask with a cross like the Redeemer, but with a flaming XII over his right eye. He appears to have suffered a large amount of battle damage, as his ravaged armor and mask have numerous gouges and holes and from them spills Celestial Fire. This fire is controlled and flows with his will, unlike when the second Redeemer's hand was lopped off and the fire poured uncontrollably from the wound blasting everything in its path. The fire also appears to take the form of wings on his back.

Retrieved from "https://imagecomics.fandom.com/wiki/The_Disciple?oldid=66830"
Community content is available under CC-BY-SA unless otherwise noted.