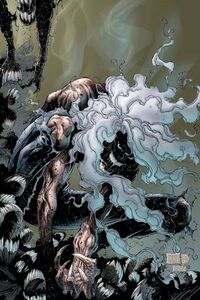 The Freak, also known as Mr. Kulbiczi, is a psychopath whose mental illness and delirium was the result of his ex-wife telling him she didn't want children. He was committed to an asylum but later built himself a mansion in the sewers.[1]

He met Spawn after he was knocked out in the sewers of New York City. He told Spawn his family was murdered by a man named Doctor Delirium. When he had sought revenge on the doctor years ago, he was disabled by Delerium's guards. He was subjected to experiments that would drive most men to become a human vegetable. He was resilient and escaped, becoming the enhanced fighter that he is today.

Upon hearing the sob story, Spawn agrees to assist him in getting revenge. The Freak led Spawn through his revenge plot. The Freak succeeded in killing the doctor by throwing him out a window.

Elsewhere, Mrs. Kulbiczi was called into the Federal Health Services Department because her husband, Mr. Kulbiczi AKA The Freak, had escaped again. They tried reaching Dr. Delorean but he wasn't answering. Spawn began wondering if this was really an insane journey not against Delirium, but against his health care professional.[2]

Later, the Freak ordered John Leekley, the bum to cause trouble with other bums. When John was confronted by Spawn, Leekley turned on him and killed him while they were in the Dead Zone, a place where Spawn has no powers. John grabbed a bag of Spawn's Necroplasm to prove he succeeded in killing him. When John informed The Freak of his actions, he was killed by the Freak for not obeying orders. When the Freak stabbed John, this unknowingly created Eddie Beckett by having him drop Necroplasm behind.[3]

The murder of Spawn incited a war between Spawn's bum supporters and those against him being in the alleys. Sam Burke and Twitch Williams dragged Spawn's body out of the Dead Zone and the creatures of the night restored him. Spawn then chased down The Freak and had him consumed in negative Karma. The Freak screamed in pain as worms consumed him until he turned into pure black.[4]

Retrieved from "https://imagecomics.fandom.com/wiki/The_Freak?oldid=67339"
Community content is available under CC-BY-SA unless otherwise noted.