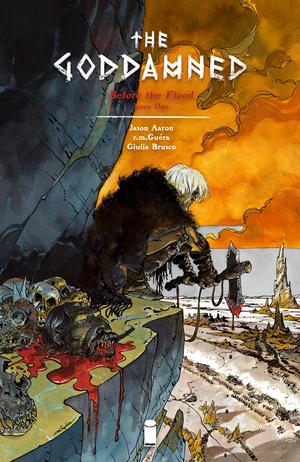 Cain. Son of Adam. The man who invented murder.

Cain wakes up in the desert when a small boy accidentally pees on his head. The boy is shocked that he's alive and that he has no scars on his body. Cain asks the boy if he knows what happened to his stuff. He warns him the bone boys have it and they are ruthless.

Cain, without emotion walks towards the Bone Boys and murders all of them. He takes what was his once more as the boy watches in utter shock. Cain thinks about how God cast him out of heaven over a thousand years ago and has lived in filth since then. He thinks about how is the inventor of murder.

Elsewhere, Noah tracks down people as he builds his ship.

Writer JASON AARON & artist R.M. GUÉRA, the creators of the seminal crime series SCALPED, reunite for a new ongoing series of stark and brutal biblical noir, which begins with a SPECIAL OVER-SIZED DEBUT ISSUE featuring thirty pages of story. "And the earth was filled with violence." Genesis 6:11 It's 1,655 years after Eden, and life on Earth has already gone to hell. The world of man is a place of wanton cruelty and wickedness. Prehistoric monsters and stone-age marauders roam the land. Murder and destruction are the rule of the day. Humankind is a failed experiment. This is life before the Flood. The story of man on the verge of his first apocalypse. Welcome to the world of the Goddamned.

Retrieved from "https://imagecomics.fandom.com/wiki/The_Goddamned_Vol_1_1?oldid=48510"
Community content is available under CC-BY-SA unless otherwise noted.