This is Immortal from the comics. For the TV show character, see Immortal (TV). 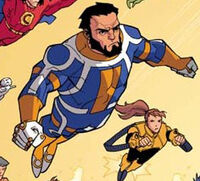 Most of the Immortal's origin is unknown, even to him. Sometime in his past over 3000 years ago, an accident happened to him that gave him his immortality and superhuman abilities. He would take up the duties of a knight possibly under King Arthur as Lancelot, an explorer under or possibly as Christopher Columbus in the Spanish Armada, fought in the American Revolution, became President of the United States by taking the alias of Abraham Lincoln, fought as a soldier in the World War I, and became a superhero in the 1930s. Sometime after becoming a superhero, he would meet Cecil Stedman and become one of the original members of the Guardians of the Globe.[2].

The Immortal had found Bi-Plane attempted to commit suicide to infect the Denver population. Immortal grabbed him and threw him into space, killing him. He got an urgent call from the Guardians base and headed to Utah. He stated the secret code and the confused Guardians looked at him as he had called them. The Guardians are killed by Nolan Grayson and Immortal witnesses him and says "I never liked you". He is decapitated and Omni-Man replies that the feeling is 'mutual'. The Immortal is buried along with the other Guardians. Some young men attempt to dug up his body, believing that drinking his blood will make them immortal as well. The Mauler twins stop them, taking his head to a lab. They revive him while attempting to enslave him. The beacon fails and Immortal flies out. He finds Nolan on a beach and attacks him, demanding to know why he killed the original Guardians. Nolan impales him and rips his torso in half. He would again be revived by doctors in the white room at the Pentagon. He would rejoin the Guardians of the Globe and have many adventures with them.

Years later, Mark touched a white light that put him back into his body at the time before he received his powers and with all of his memories. He attempted to talk to his father about not killing the Guardians of the Globe again.[3] Nolan became angry and immediately attacked Mark. Mark led him to Utah where he tricked Nolan into smashing into the Guardians of the Globe headquarters where The Immortal and several others were located. Mark revealed Nolan's plans to the Guardians and they teamed up and subdued Nolan. During the battle, The Immortal had his heart punched out of him by Nolan. Cecil Stedmen soon arrived and agreed to bring Nolan back to the Pentagon and restrain him. The Immortal was revealed to have survived the attack. [4]

Still later in the reboot, the Immortal and the original Guardians of the Globe take down the Lizard League. Even later, with the Teen Team, they defeat the Flaxans.[5]

Mark returns to his timeline, but five years after the events that occurred just before the reboot. Immortal is seen teaming up with Emperor Nolan, his Viltrumites (including Thula), Robot, and Tech Jacket to stop the Technicians.[6]