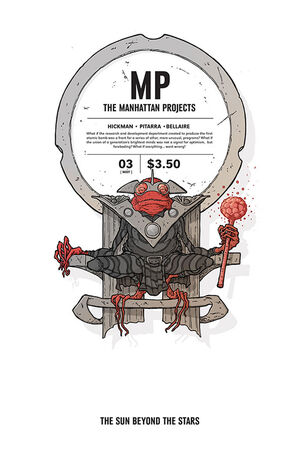 The ignorance of the young masquerading as arrogance.

On the Science Council Homeworld, the Great Sionox lets his Sionnu slaves feast on his excretions as a form of exchanging information. He receives a sudden transmission from Ryleth the Hammer about Primor and the missing spores. Sionox tells him he will grant him whatever he wishes if he helps him regain the spores.

Meanwhile aboard the Nebula Left, Primor rides Laika about not going faster as they are being pursued by enemy ships. She leads them into a minefield which distracts Ryleth as he pursues them. However, in the chaos Ryleth secretly attaches his ship to the bottom of the Nebula Left to allow him to track them to their destination.

On board the ship, Yuri Gagarin attempts to reconstruct UNa. However, he finds he still continues to lie and tries to reprogram him. Rys questions why he'd try and reprogram him and Yuri is shocked that Rhys can speak. Rhys insults him and tells him he didn't think he was even worth talking with.

The crew pass through the gate and are shocked to find a battalion of Sionnu warships waiting for them as they complete their jump.

“UNRELIABLE” If you’re depending on a lying robot not to get you into trouble with an intergalactic criminal science organization called the Library, then always bet on Black. The greatest FEEL GOOD, BAD SCIENCE book in the long history of man returns in THE MANHATTAN PROJECTS: THE SUN BEYOND THE STARS.

Retrieved from "https://imagecomics.fandom.com/wiki/The_Manhattan_Projects:_The_Sun_Beyond_the_Stars_Vol_1_3?oldid=55420"
Community content is available under CC-BY-SA unless otherwise noted.