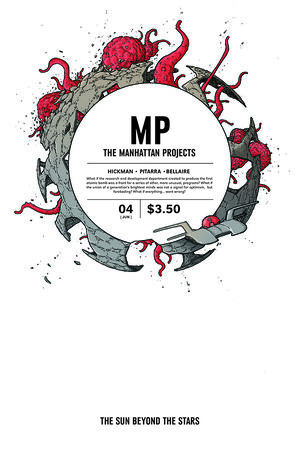 The Nebula Left is completely surrounded by the Sionnu. They order that the members of the Nebula Left surrender. When Yuri Gagarin refuses, they board the ship. The crew quickly decides to hand over their request, Primor. Primor tries to escape with the Spores.

Meanwhile, Judge Ryleth the Hammer has his ship secretly attached to the bottom of the Nebula Left and calls in to The Great Sionox. He demands to be paid for leading them to the crew. However, the Great Sionox tells him he didn't deliver them, he only lead them to them and for that, he shall not be paid.

After hanging up the phone, Ryleth decides to drill through his hull and board the Nebula. He spots Primor running by and prepares to attack him. When Rys and UNa enter the hallway, chasing Primor, they spot Ryleth. Ryleth turns and urders Rys, who was thought to be indestructible. UNa sacrifices himself, as he is covered in Rys blood, and overloads himself and knocks out Ryleth. When Yuri and Laika enter, they move to inspect the downed Ryleth. However, Ryleth was playing opossum and jumps to his feet and knocks over Yuri. Laika grabs Ryleth's hammer and shatters Ryleth's head.

Meanwhile, Primor has entered the weapons room. He loads spores into a warhead and launches them to the Sionnu planets. The spores hatch and destroy the homeworld. A spore is also set off on their ship and Laika and Yuri put on their spacesuits. They launch out into space, but unfortunately are pulled by the gravity of a nearby star and are destroyed by the sun's heat.

Retrieved from "https://imagecomics.fandom.com/wiki/The_Manhattan_Projects:_The_Sun_Beyond_the_Stars_Vol_1_4?oldid=55421"
Community content is available under CC-BY-SA unless otherwise noted.