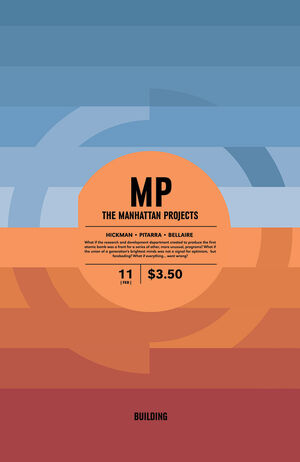 Enrico Fermi and Harry Daghlian sit amidst Los Alamos which has vastly expanded since their infinite budget has began.[1] Daghlian tells Enrico he wants to eat a milkshake and Enrico launches into a diatribe about abundance and the need for efficiency.

The two meet Helmutt Grottrup at a Red Torii to make a jump. The machine is now powered by vats of artificial life, those grown without brains so they feel no pain. FDR AI greets them and brings them to a meeting room with the other members of the Manhattan Project. Oppenheimer proposes 3 plans.

Daghlian and Fermi walk outside on the moon and talk about being friends.

Daghlian recalls before his accident and stood there as a scientist walked a plutonium ball towards a machine. He watched the man trip and drop it lighting his body and flesh on fire until only irradiated bones remain. He recalls being placed in a prison to protect his radiation from affecting others. Enrico Fermi was the only person who visited him. He eventually rigged a machine for Daghlian to leave the solitary confinement and move about in his suit.

Dahglian and Fermi walked outside and discussed that one day Fermi would have to tell everyone he is an alien.

Retrieved from "https://imagecomics.fandom.com/wiki/The_Manhattan_Projects_Vol_1_11?oldid=55205"
Community content is available under CC-BY-SA unless otherwise noted.