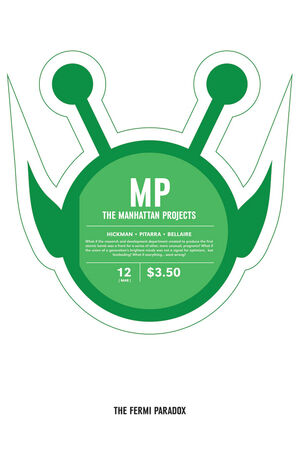 As Enrico Fermi and Harry Daghlian continue to sit on the moon, Enrico receives a drone command. He attacks Harry and sends him into space exploding his suit and body.

Enrico recalls being a young drone, and upon landing on earth, killing, burying, and taking the identity of a young boy named Enrico Fermi. He took on his personality and spent his entire life learning and observing. He recalls being recruited by Leslie Groves into the space program when he told him it was more complicated than just researching the atom bomb. He recalls sending transmissions when they destroyed the Siill. His orders were to destroy the humans if they ever began plans to expand beyond their planet.

On Orbital Space Station, Singularity, Enrico has transformed into his alien form and is sabotaging the comm room with Richard Feynman tied up on a pole. Feynman realizes he knows too much about him as they talk and deduces he must be Enrico. Enrico looks conflicted about hurting his friend Daghlian but more commands come in and he snaps back into a killing machine.

Outside, Daghlian pulls himself together again and lands on the Moon. He attacks Enrico with a radiation blast and demands to know why he's turned on them.

Retrieved from "https://imagecomics.fandom.com/wiki/The_Manhattan_Projects_Vol_1_12?oldid=55206"
Community content is available under CC-BY-SA unless otherwise noted.