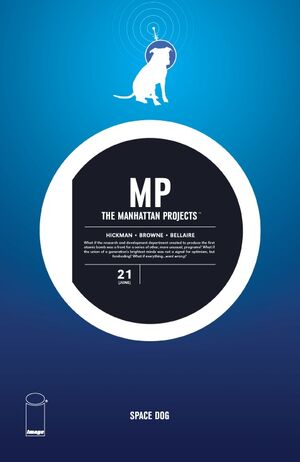 Aboard the Orbital Space Station, Singularity, Laika is still being boarded by an alien space craft.[1] As they ship is being absorbed, the system computer tells it that the protocol is to drop it's memory core to protect Star City.

The Sionnu discuss in a foreign language the barbaric technology of the humans. They discuss the machines was smart enough to begin suiciding the recall parameters.

They place Laika in a containment cell. They give him biscuits that will auto-translate speech for him. They Sionnu discuss keeping him in pre-containment before adding him to the library. They are a science team who discuss researching all creatures in the galaxy.

Laika replies he means peace and is on a science mission. The Sionnu laugh at what he considers science. He says they didn't even have a containment center to take and observe species. Laika at first protests that humans wouldn't do that, but then realize he's from a domesticated breed and agrees with the Sionnu.

The Sionnu tell Laika they've accessed the binary files on his ship and believe he's safe to head into long-term general population in The Pen. Upon entering the main containment center, he meets Rys and UNa, a series nine espionage and infiltration droid. UNa explains that these space exploration trips sometimes last 10 years.

Suddenly, a D'Hri warship, hundreds of times larger than the Sionnu science ship. They are suddenly attacked by the warship. One of the Sionnu explains that the D'Hri are bonded pairs. They think that one of their creatures in their library is a D'Hri and they want it back. In a panic, the prisoners are all released from The Pen.

As they escape, Laika falls into a genetic re-sequencing DNA ooze. Laika suddenly grows fingers with opposable thumbs from his paws, and a bipedal leg structure.

They spot the Nebula Left, an old ship, and board it to escape. Laika asks which direction is Earth and how to head towards it.

Yuri continues sitting drinking Vodka. He asks for a sign that Laika is ok.

Retrieved from "https://imagecomics.fandom.com/wiki/The_Manhattan_Projects_Vol_1_21?oldid=38203"
Community content is available under CC-BY-SA unless otherwise noted.