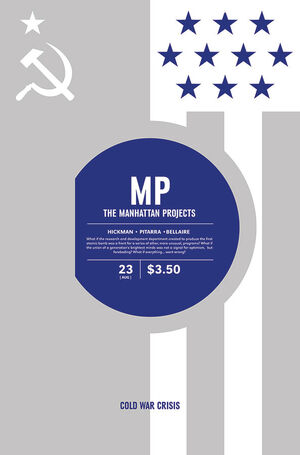 At the White House, Lyndon B. Johnson walks in to find John F. Kennedy performing drugs and acting paranoid that he has two agents who have gone missing. He shows Johnson the pictures of the two men, who were the two men that Leslie Groves and William Westmoreland killed.[1]

At Star City, Dmitriy Ustinov is being experimented on by Brezhnev's scientists to discover his secrets. They agree to head to Cuba where they find Che Guevara and Fidel Castro at a casino. After a brief shoot out, they subdue them and subject them to mind control experiments to get back at the U.S.

Johnson heads to the War Department while the Cubans are blockaded by American ships. He heads to an unseen basement where two men guard a Red Torii to Los Alamos. Johnson murders his two bodyguards as proof he means business and the men let him through. Inside, he convinces Groves and Westmoreland to work with him.

Retrieved from "https://imagecomics.fandom.com/wiki/The_Manhattan_Projects_Vol_1_23?oldid=38547"
Community content is available under CC-BY-SA unless otherwise noted.