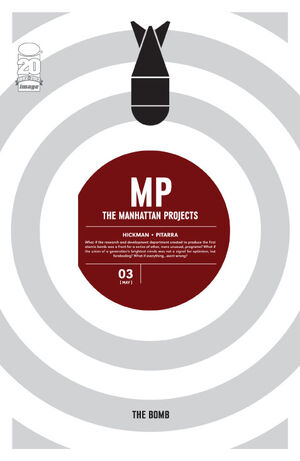 Four months ago at Los Alamos, Richard Feynman walked in to ask Albert Einstein for assistance in designing the delivery mechanism for the atomic bomb. Einstein continued to stare at his Monolith and tells him to just design both and acted annoyed.

Previously, Mr. Groves talked to the boy Leslie Groves. He explains he left being a pastor when he was born to join the military as he felt he had a higher purpose with raising Leslie. He then has Leslie use his Hebrew to read a scripture. He learns that the commonly taught phrase, "The righteous who fear God" is wrong, and it's actually translatable to God fearing the righteous. He's shocked at this revolution. He learns that no one may exceed the right of the righteous.

Now, Enrico Fermi and Harry Daghlian prep their nuclear suits to enter a room with radioactive plutonium. Daglian bes Fermi to hurry up as he hungers for the nuclear plutonium. In the room, Daghlian opens his suit to consume the plutonium and explains how his skin and organs may have disappeared but what was left was extended life. Fermi warns him even with a half-life of 24,000 years, it's nothing in the grand scheme of things.

At the George Washington Masonic Memorial, Harry S. Truman is abducted by the United States Secret Service into safety as Franklin D. Roosevelt has just been reported dead.

At the War Department, Roosevelt's body is rushed into Professor Daghlian's care. He plugs him into the mainframe, and cheers as the world's first artificial intelligence is created with Roosevelt's brain. Grove's watches over in excitement.

At the White House, Harry Truman is befuddled with the assignment given to him as he sits across a stoic Joseph Oppenheimer. General Groves calls him on the phone to explain he's been left in the dark about the Manhattan Projects. He tells him it's a weapon that's been created that can kill 100,000 people if they're lucky. When Groves asks for permissions to drop it, Truman refuses. At the same time, the Roosevelt A.I. is asked what to do and it says the only thing they have to fear is themselves. Groves orders the bomb dropped as he recalls the learnings of his father that one may exceed the right of the righteous.

Retrieved from "https://imagecomics.fandom.com/wiki/The_Manhattan_Projects_Vol_1_3?oldid=38629"
Community content is available under CC-BY-SA unless otherwise noted.