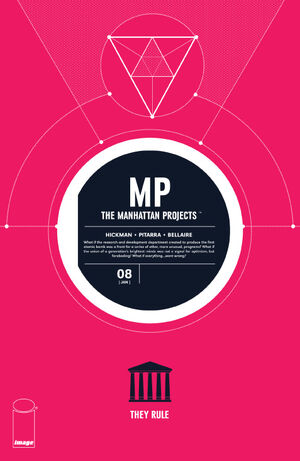 Harry S. Truman sits outraged at a secret round table meeting with El Conquistadori, The Robe, FDR AI, and Nehebu. They vote on what to do with those that ignore their wishes. Upon voting, they tell FDR AI to purge the system.

At Star City the FDR AI program loads into the machines that stand over the troops. Suddenly, they attack the troops and overpower them. Wernher von Braun goes toe-to-toe with one and uses a hidden rocket in his cybernetic arm to blow the machine up. He's relieved and sits exhausted on the floor. To his dismay, the FDR AI loads on another computer to his left and he realizes he needs to take out the main FDR AI. He phones Leslie Groves who is with Dmitriy Ustinov. Groves tells him they're pinned down by hundreds of droids and they'll have to make the jump to Los Alamos by themselves.

Laika and Yuri Gagarin find Wernher and tell him to grab a gun. They sneak to the Red Torii where Helmutt Grottrup stands alone. The FDR AI killed all the Death Buddihsts and he alone can power the Torii. He doesn't believe he can power it by himself. Wernher promises him freedom if he can do it. Helmutt pushes with all his might and powers up the gate. Laika bites Helmutt in the balls before they jump through the gate.

At the Orbital Space Station, Singularity, Albrecht Einstein and Richard Feynman fight off hundreds of android FDR AIs attacking them.

Wernher, Yuri, and Laika jump through the gate the Los Alamos and are attacked by hundreds of FDR AIs. They make their way to the mainframe. Before Wernher can destroy it, he's hit with a rocket blowing off half of his face, robotic arm, and legs. His final move is unplugging the mainframe.

Upon waking up, he can see the Manhattan Projects team standing over him as he's hooked up to medical machines and missing half of his appendages.

Retrieved from "https://imagecomics.fandom.com/wiki/The_Manhattan_Projects_Vol_1_8?oldid=63981"
Community content is available under CC-BY-SA unless otherwise noted.