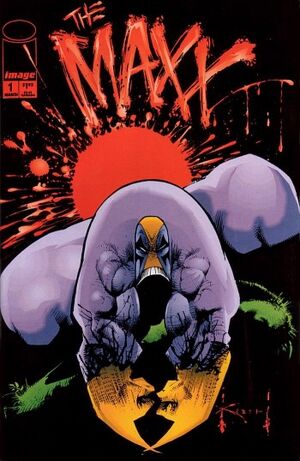 The Maxx is a comic book and animated series written and illustrated by Sam Kieth (with writing assistance from William Messner-Loebs earlier on in the series and from Alan Moore in a later issue), and published by Image Comics. The first issue was published in March, 1993.

The series follows the story of The Maxx, a homeless man who believes he is a superhero. The Maxx shifts between the real world and a dream world, which he refers to as The Outback, which is just as real to him as the real world. His only friend is Julie Winters, a "freelance social worker". Little does she know that she and The Maxx have a deeper connection, and it involves the dream world into which The Maxx is constantly drawn.

One day, after Julie stops her car to help a man in the street, she is beaten, raped, and left to die. To cope, she hides in what is referred to as her 'Outback' (a primeval landscape situated entirely in Julie's subconscious), where she has control. In The Outback, she becomes "The Leopard Queen", an all-powerful goddess. She spends so much time dwelling in her Outback that the real world and The Outback gradually become unstable.

One night, she accidentally hits a homeless man with her car. Remembering what happened the last time she stopped to help someone, she covers the unconscious body with trash, but in doing so she unintentionally opens a link to the Outback. After Julie leaves, a lampshade in the trash (which had brushed the Outback) expands over the man's body, becoming a mask that costumes him and links him to Julie.

The series begins three years later, and the reader is not initially aware of the deep interconnections between the characters; they are slowly revealed over the course of the series. The homeless man does not remember anything about himself, only that Julie is important to him somehow. He doesn't even know his own name (he now calls himself The Maxx) or what he looks like under his mask.

Mr. Gone, a serial killer and rapist with a telepathic link to Julie and extensive knowledge of and access to people's various Outbacks, starts to call Julie. She thinks he is merely an obscene phone caller, and ignores him. Eventually, The Maxx gets in Gone's way by 'protecting' Julie, so Gone tries to kill him. The Maxx fights him in both The Outback and the real world. In the meantime, Julie leaves Maxx and wanders the countryside, sleeping with any man she meets.

Eventually, Mr. Gone makes Julie see the truth about her past, and reveals to her how The Maxx came to be. An ironic twist is revealed by Gone to a bit character who is killed: the fact that Gone first met Julie when she was a child. She knew him as "uncle Artie", a friend of her father's. Gone's tall tales about a visit to Australia helped shape Julie's outback. As Julie begins to heal herself and The Outback, the series follows Sarah, a depressed teenager whose mother sends her to Julie for counseling. Sarah is often in conflict with her mother, who disciplines her so she won't grow up to be like her father — eventually revealed to be none other than Mr. Gone.

After the conclusion of the first storyline, the action leaps forward from 1995 (the then-present) to the year 2005. Julie and Dave (the former Maxx) having vanished, the action focuses on Sara (as she now spells her name) and a murderous escapee from her Outback. The story also reveals Sara's Outback and Mr. Gone's origin story. Dave, who dons his Maxx costume once again, returns with Julie and her son, to confront Mr. Gone.

One of the dominant concepts of The Maxx is that every human being has a spirit animal, which is linked to the person during a pivotal moment in their life. Julie's spirit animal is a rabbit. When she was very young, Julie rescued an injured rabbit that lay in the road in front of her house (as seen in The Maxx No.10). Julie later witnessed her mother bludgeoning the rabbit to death with a shovel to put it out of its misery. This traumatic event linked the rabbit to Julie's subconscious. Julie projects the rabbit onto Dave as she tries to take care of him like the rabbit she was unable to save. Maxx, who is linked to Julie and her spirit animal worries that, if he removes his mask, he will find the head of a rabbit beneath it.

Sarah's spirit animal is a horse. In the latter half of the series, this spirit animal manifests itself as Norbert, a homeless man Sarah takes pity on.

The main creatures that inhabit The Outback are white Isz. White Isz are herbivores, but can eat most other Outback creatures, as all creatures in Julie's Outback are actually plants. When white Isz are brought from The Outback into the real world they become black Isz. Black Isz are carnivores. They are stronger, faster, and have sharper teeth than white Isz. Black Isz assume different appearances depending on the clothes they're wearing: if one is dressed as an old lady, it appears as an old lady to anyone who doesn't know what it really is. All Isz are eyeless. In the latter part of the series, Sara's Isz appear as pink, flying, eyeless fairies that explode if not kept in water.

The Maxx has made cameo appearances in the graphic novel Popbot (which Kieth co-wrote); the independent comic Armature issue #1; the Sonic the Hedgehog comic Sonic Super Special #7 Sonic/Image Crossover; the four issue limited series Altered Image, the Image mini series BloodWulf (1995) and Savage Dragon #28 (collected in Savage Dragon Vol. 7: A Talk With God). He also briefly appears in the series Mars Attacks Image. He appears on a TV screen on the Frostbite version of the cover to DV8 #1.

The comic book series was adapted into an animated series as part of the MTV program Oddities. It covered Darker Image #1, The Maxx #1/2, and issues #1-11 of the regular series.