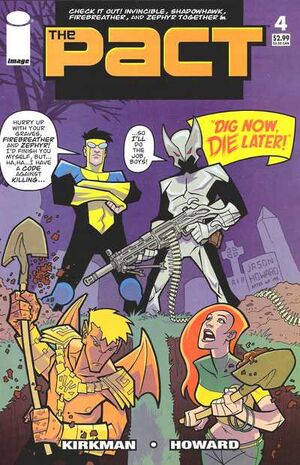 Firebreather is pulled out of his school in Nevada by the principal because Invincible is looking for him. Together with Zephyr and Shadowhawk these four teens make up the superhero group called "The Pact". They have been called by Cecil Stedman to investigate some underground activity. Invincible makes an entrance deep into the earth and the team explores a volcanic cavern full of Magmanites worshipping their new king, who turns out to be Doc Seismic. Invincible is confused, because he assumed that Doc Seismic died.[1]

Doc Seismic reveals he used his vibrations to cushion his fall when he landed down there. He discovered the Magmanites and also realized he could communicate with them through his vibrations. Doc Seismic goes up to Invincible... and goes and his knees and thanks him. Doc Seismic apparently has been looking for a way to retire without the interruption of other people, and now he can be away from society. However, because he can now communicate with all underground creatures, he plans to invade the surface world. Invincible punches him out before he can summon any monsters, but this makes the Magmanites angry. They try to cause a cave-in, and Shadowhawk protects Zephyr and himself with a force field from his costume. Zephyr questions his abilities, and Firebreather blasts a new hole through the rocks.

Invincible flies them all out with Doc Sesimic, who he imprisons in the Pentagon. Cecil commends the team on a job well done, but Zephyr believes she had too close of a call and quits. Shadowhawk does as well, and Invincible realizes he never needed a team anyway. This leaves a sad Firebreather all alone.

Retrieved from "https://imagecomics.fandom.com/wiki/The_Pact_Vol_2_4?oldid=63023"
Community content is available under CC-BY-SA unless otherwise noted.