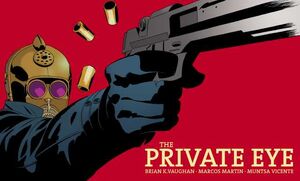 In downtown Los Angeles, P.I. waits for his contact. Melanie peels up to the curb. PI hopes into her vehicle and the two argue about him refusing to hand information into the DMV in order to get a drivers license. He tells her to take him to her address as Taj McGill is looking for him to investigate her past.

Meanwhile at Taj's home, Mike Strunk investigates Taj's murder scene. Raveen McGill waits to speak with him in the next room and had deactivated her Nym to speak with him. She tells him she had no enemies or boyfriend. When asked about the name Patrick Immelmann on her hands, she paused before lying and saying she doesn't recognize the name.

PI arrives to the Carlyle but finds his client is already dead from the doorman and crowd outside. He heads back to grab Melanie to leave. She insists they stay to research who killed her. When he refuses she leaves him stranded in anger.

Elsewhere, DeGuerre, still dressed in Taj's Nym, calls Nebular into a slum party of town called The Tubes. Nebular lauds Taj for calling him. He says he wasn't sure he'd hear from her after they left The Group. DeGuerre reveals his identity from the Nym and pulls out a knife.

PI returns to his Public Notary office. He's suddenly attacked by a masked assailant but overcomes and disables their Nym. He's shocked to find it's Raveena McGill. She accuses him of killing her sister. When he convinced her he didn't, the two hug.

She tells him he works for her now and will find her Killer. Or else she'll reveal his identity to the Press. When she tells him they already know the password, he becomes worried. He tells her it's not the Press he's worried about, it's the other guys. Suddenly, two men break into the room through the windows and murmur French while pointing their guns at them.

Retrieved from "https://imagecomics.fandom.com/wiki/The_Private_Eye_Vol_1_2?oldid=50552"
Community content is available under CC-BY-SA unless otherwise noted.