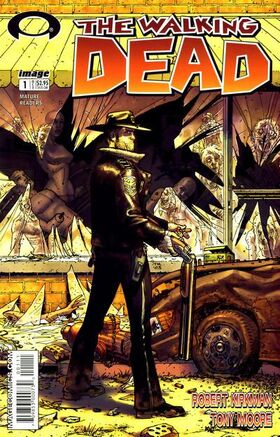 He was going to eat us, dad.

Appearing in "The Walking Dead"

Plot Synopsis for "The Walking Dead"

The story begins with officers Rick Grimes and his partner Shane in a shootout with a escaped convict. Rick plans on flanking the convict but is then shot.

The scene changes to Rick awakening in a hospital bed, due to being put into a coma by the previous shootout. Rick, still weak, dresses in his belongings and finds the hospital empty. As he takes an elevator and arrives on his destined floor he surprisingly finds a corpse. Calling to anyone for help, Rick then finds the building's doors to the cafeteria barred. After unlocking the doors, Rick stumbles into a room of zombies. Seeing him, the zombies chase after him and he stumbles into an emergency stairway. There, he wrestles a zombie which is then killed by having its neck severed. Rick quickly leaves the hospital, seeing signs of violence and finds an very emaciated zombie. Disturbed by what he has seen, Rick takes an unused bicycle and peddles home.

Upon arriving there he finds his home and neighborhood entirely deserted and ransacked. After searching his home, Rick wanders onto his neighbor's lawn and is suddenly hit in the back of his head by a shovel, and knocked out.

Rick later awakes on a couch and is greeted by a man named Morgan who asks Rick to join him with his son, Duane, for dinner. Confused, Rick demands to know what has happened to him. Morgan explains that his son knocked him out, accidentally mistaking him for "those things". Still confused, Rick tells Morgan he wants to know what has happened. Later Rick tells Morgan about everything that has happened to him, and Morgan briefs him of the events after Rick's coma: in the world, the dead, for unexplained reasons, have come to 'life' and start feeding/attacking the living. Before the nation's news media stopped broadcasting, Morgan further explained that the American government told its citizens to evacuate to nearby bigger cities to be safe; however, Morgan felt that it is safe to be isolated away from the cities, and has been living in Rick's neighborhood ever since. Hearing about the cities, Rick believed that his family is safe in Atlanta and plans to get a car to the city.

Rick and the Jones arrive at Rick's police station where Rick offers them the station's weapons and police cruisers. Rick bids farewell to the Jones as he departs in his car for Atlanta. On the way he stops back to where he discovered the undead emancipated corpse and puts it out of its misery before moving on.

Rick Grimes, Sheriff of a small town in Kentucky awakes in a hospital. Comatose after being shot while on duty, Rick finds the world abandoned of all things living and is faced with walking undead, who attack him on sight. He returns home to find his family, son Carl and wife Lori, gone. He meets his new neighbor, who points him towards Atlanta. After retrieving supplies from the abandoned Police Station, Rick sets off to Atlanta to search for his family.

The Walking Dead: Book One HC

The Walking Dead: Compendium One
Add a photo to this gallery

Retrieved from "https://imagecomics.fandom.com/wiki/The_Walking_Dead_Vol_1_1?oldid=65532"
Community content is available under CC-BY-SA unless otherwise noted.