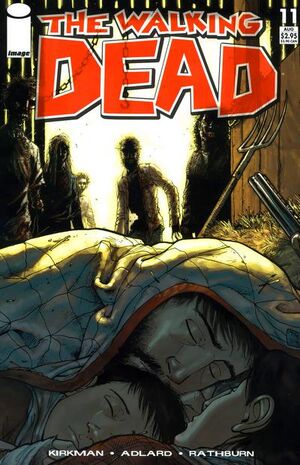 Hershel has just dropped the bombshell that he's been keeping his dead family members in the barn on Rick, who goes nuts. The next day, while practicing shooting, Hershel yells at them to stop, afraid that they'll destroy a neighboring house. A zombie appears and Hershall decides to herd him into the barn, but one of the zombies takes him by surprise. In the chaos, his daughter and son are both killed. He finally stops seeing the zombies as people and kills them, and stops short of killing himself. Meanwhile, Tyreese's daughter and her boyfriend are up to no good.

Retrieved from "https://imagecomics.fandom.com/wiki/The_Walking_Dead_Vol_1_11?oldid=55377"
Community content is available under CC-BY-SA unless otherwise noted.