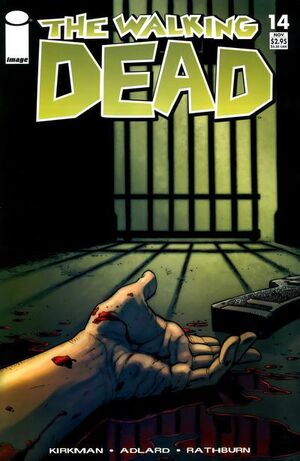 It seems that the abandoned prison isn't quite as abandoned as the group initially thought. And there aren't any guards inside. Introductions are made and Dexter gives the group the grand tour of the prison. Afterward, they burn the dead zombies and let Hershel know about the prison. After the gangs are all back together, everything seems to be turning out okay... until Chris and Tyreese's daughter enter into a murder/suicide pact. But Chris doesn't go through with it and Julie turns into a zombie in Tyreese's arms.

Textless cover
Add a photo to this gallery

Retrieved from "https://imagecomics.fandom.com/wiki/The_Walking_Dead_Vol_1_14?oldid=55384"
Community content is available under CC-BY-SA unless otherwise noted.