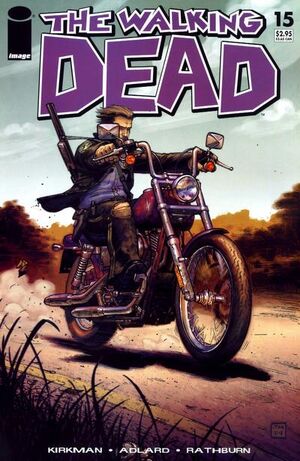 Julie and Chris entered into a murder/suicide pact, but only Julie died. After destroy the Julie zombie, Tyreese turned on Chris. With both dead, Tyreese burned the bodies in the morning. But, because they both came back without being bitten, Rick decides that there's something he must do. He gases up a motorcycle from the garage and heads off to outside of Atlanta where Shane was buried. He kills the Shane zombie and turns around.

Meanwhile, back at the prison, Tyreese is swarmed by zombies in the gym while they're clearing it out and Rachel and Susie have been decapitated in the barber room.

Retrieved from "https://imagecomics.fandom.com/wiki/The_Walking_Dead_Vol_1_15?oldid=55385"
Community content is available under CC-BY-SA unless otherwise noted.