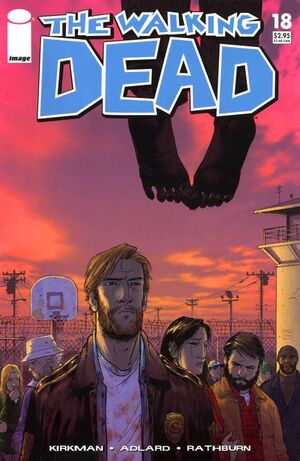 The community is in shambles over Rick's decision to execute Thomas, the killer who decapitated Hershel's youngest girls. Patricia decides that Thomas doesn't deserve death and attempts to help him escape, but Thomas assaults her when she takes him out of the cell. After throwing Thomas's corpse to the zombies, Dexter shows up with a shotgun and attempts to force the survivors out of the prison.

Rick has gone over the edge. He's alienating everyone around him-people he's come to know and trust, his family, his friends. Rick is becoming more and more isolated within the group. Where he goes from here will test the limits of his humanity.

Retrieved from "https://imagecomics.fandom.com/wiki/The_Walking_Dead_Vol_1_18?oldid=55386"
Community content is available under CC-BY-SA unless otherwise noted.