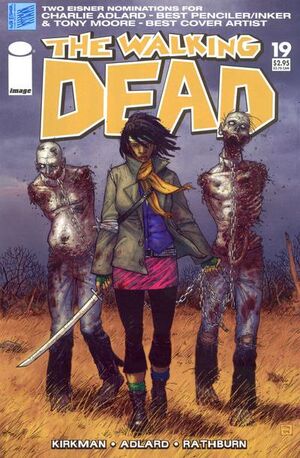 Dexter has decided that he's had enough of the people intruding upon his home and threatens to kill Rick's family if they don't all leave. Unfortunately for him, the guns he got from the armory were in A block, which is still crawling with zombies. During the shoot out, Dexter was murdered by Rick and the zombies were dispatched. Now that they're free of danger, they accept another wandering human into their fold when she saves Otis' life.

Retrieved from "https://imagecomics.fandom.com/wiki/The_Walking_Dead_Vol_1_19?oldid=53980"
Community content is available under CC-BY-SA unless otherwise noted.