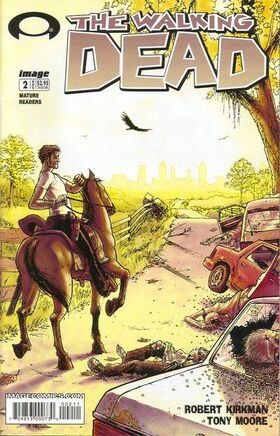 You're going to have to keep your eyes open, man. Where've you been for the past month?

After traveling all night, Rick runs out of gas. He walks to a nearby farm, and after going into the house and discovering the corpses of its occupants, heads to the barn. He finds a horse and an ax inside and continues traveling to Atlanta on horseback.

Rick finally makes it to Atlanta only to find it overrun with zombies. He gets thrown from the horse and as some of the zombies attack and devour it, others turn their attention to Rick. He uses the ax he found at the barn to protect himself, but soon gets surrounded and he begins to use his gun. Suddenly, a young man grabs Rick and tells him to follow him and to stop using the gun. They climb to a rooftop and jump from roof to roof to get close to the edge of town. The young man says that the zombies are slow and that they should easily maneuver around them. He also warns that one bite from a zombie will infect a person and turn them into a zombie as well.

The two finally make it to the edge of town near a wooded area. The young man explains that everyone came to Atlanta, but people started dying and turning into zombies. In a week's time, everyone in Atlanta had died. Rick falls to the ground as he fears that his wife and son are now dead. The young man consoles Rick and tells him that he is with a small camp of people and brings him along.

Just as Rick gets to the camp, he sees his wife, Lori, and his son, Carl. All three embrace, happily reunited.

Rick heads to Atlanta where he hopes to find his wife and son.

The Walking Dead: Days Gone By

The Walking Dead: Book One

The Walking Dead: Compendium One