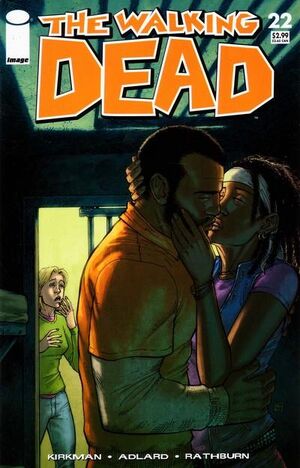 Rick finally gets his bandages off and his hand doesn't look nearly as bad as it should. He has little use of his fingers, but he can move them. Also, after catching Tyreese cheating on her, Carol had decided to dump him. But she's more broken up about it that she lets on, she attempts to commit suicide in her cell. He goes to tell Tyreese, but finds him kissing Michonne. The two get into a fight and Tyreese punches him in the face.

With the dangers of this zombie filled world safely on the other side of the prison walls our band of survivors finally has time to explore their new home. Unfortunately there's still more than enough conflict on the inside of the walls.

Retrieved from "https://imagecomics.fandom.com/wiki/The_Walking_Dead_Vol_1_22?oldid=54093"
Community content is available under CC-BY-SA unless otherwise noted.