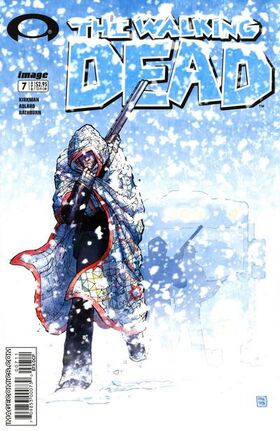 With Shane dead, no one opposes Rick's idea to move the camp somewhere warmer and safer than where they are now. They move on down the road and stop to find Tyreese, Julie, and Chris. The three join up with the survivors and prove themselves as harmless when Tyreese helps Rick fight off some zombies. That evening, the three decide to officially stay with the group and Lori tells Rick that she's pregnant.

Winter has come and the decision is made to move the camp to a safer area. With such harsh weather conditions, Rick and company realize the zombies all around them are the least of their worries. As a bad situation somehow gets worse, Rick and his family find themselves wondering, "What next?" What next, indeed...

Retrieved from "https://imagecomics.fandom.com/wiki/The_Walking_Dead_Vol_1_7?oldid=69115"
Community content is available under CC-BY-SA unless otherwise noted.