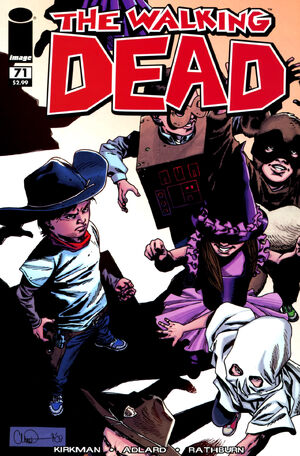 The compound kids celebrate Halloween in the day because night is scary to them. Rick is surprised to hear Carl tell him that he doesn't want to participate because the life in the compound seems phony to him. He doesn't want to become soft because once they go back outside, he doesn't want to die. Other members of Rick's group make similar comments, but Rick feels so good about remaining there he thinks that if Douglas tried to make them leave, they could simply take the compound away from his people.

Retrieved from "https://imagecomics.fandom.com/wiki/The_Walking_Dead_Vol_1_71?oldid=15009"
Community content is available under CC-BY-SA unless otherwise noted.