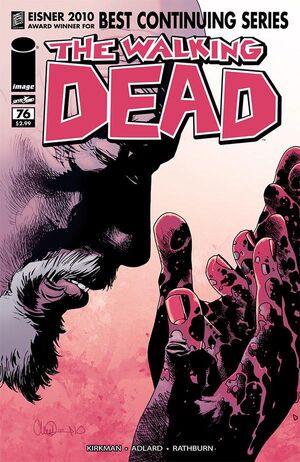 Douglas and Rick discuss Rick's confrontation with Pete. Douglas appreciates that Rick has brought the abuse out into the open, but he insists Rick never question his leadership again. Rick goes home to get some sleep where he passes Michonne who tells him to get his shit together. Carl walks in on Rick talking to his dead wife.

Retrieved from "https://imagecomics.fandom.com/wiki/The_Walking_Dead_Vol_1_76?oldid=15014"
Community content is available under CC-BY-SA unless otherwise noted.