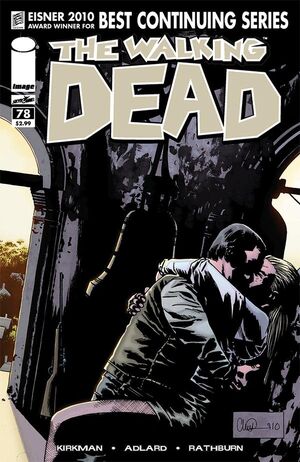 The gang arrives at the compound and threatens Rick into letting them enter. Andrea, stationed in the bell tower, picks off their sniper and their leader. She shouts down to the rest of the gang to leave and she will hold her fire, but the gang thinks the compound is bluffing and begins a firefight which the compound wins, but not before the gunfire has started off a herd of zombies moving in their direction. Douglas, after losing his wife to Pete, and realizing that Rick's idea to station Andrea in the bell tower saved the compound, steps down as leader in favor of Rick.

Retrieved from "https://imagecomics.fandom.com/wiki/The_Walking_Dead_Vol_1_78?oldid=15016"
Community content is available under CC-BY-SA unless otherwise noted.