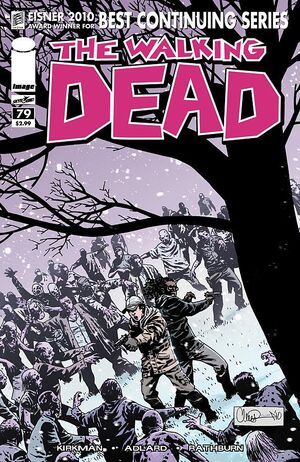 Aaron returns to the compound and discusses with Douglas his abdication in favor of Rick. Aaron tells Douglas that after his lover Eric was stabbed by a woman they were trying to recruit, he isn't going back out there because recruiting is too chancy. The first wave of the zombie herd that was attracted by the gunfire shows up and Abraham takes some people outside the wall to work in both directions clearing them off. Andrea fires a warning shot from the bell tower to get them to return when she sees a bigger wave approaching.

Retrieved from "https://imagecomics.fandom.com/wiki/The_Walking_Dead_Vol_1_79?oldid=15017"
Community content is available under CC-BY-SA unless otherwise noted.