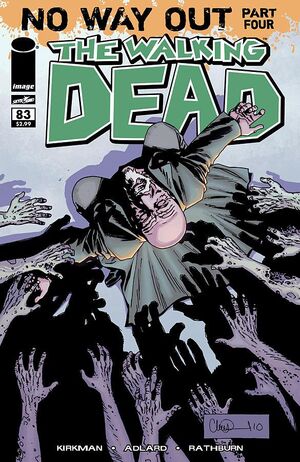 Morgan dies and Michonne decapitates him. Rick pulls in the zombie off the porch and hacks him up to spread the mess on ponchos to use as group camouflage. Maggie and Sophia stay behind in the house while the others attempt to make it to the gate, but Jessie's boy Ron panics and draws the zombie's attention. Douglas tries to commit suicide, but finds he lacks the nerve. He tries to help Rick's group, but by firing the gun he just attracts more of them. The zombies get Douglas, Jessie and Ron. A stray shot goes through Carl's right eye.

Retrieved from "https://imagecomics.fandom.com/wiki/The_Walking_Dead_Vol_1_83?oldid=15021"
Community content is available under CC-BY-SA unless otherwise noted.