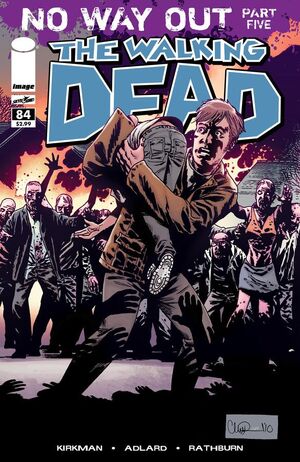 Denise gets Carl's bleeding stopped. Michonne helps Rick hold off the zombies outside while all the compound's people rally to their side. Working together, they slaughter the entire zombie herd without a single loss. As Carl lies in bed with a bandage around his head, Rick tells him that it is clear to him now that all along it was people who were the true danger and that the dead are a manageable threat. His attempt to run from them cost Jessie and Ron their lives instead of choosing to stand and fight. He foresees building an army that can protect their home and he wants Carl to live to see it.

Retrieved from "https://imagecomics.fandom.com/wiki/The_Walking_Dead_Vol_1_84?oldid=15022"
Community content is available under CC-BY-SA unless otherwise noted.