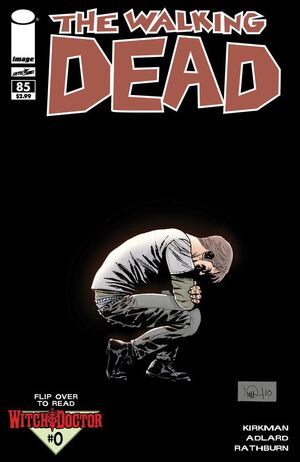 Rosita admits to Abraham that she knows he's been fucking Holly. She walks out on him, calls him an asshole, and tells him to fuck off when he tries to explain his behavior. Rick outlines his plans for reestablishing civilization to the rest of the compound. Carl shows some signs of stirring for the first time since he was shot.

Retrieved from "https://imagecomics.fandom.com/wiki/The_Walking_Dead_Vol_1_85?oldid=15023"
Community content is available under CC-BY-SA unless otherwise noted.