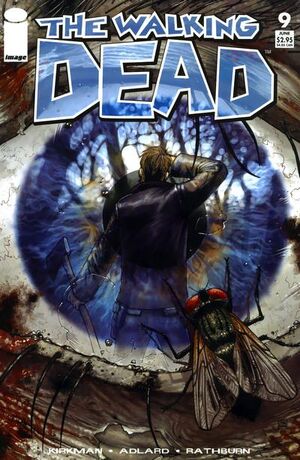 It seems like the group has finally found somewhere to call home the doesn't have wheels on it. At the gated community, everything seems fine. The people are winding down and are relaxing into a state of safety. Carol and Tyreese have gotten together as well as Andrea and Dale. After a good night's sleep Rick finally sees that "all dead" sign but is too late to get everyone out. A zombie kills Donna and Allen fires off a round at it, alerting all of the other zombies in the estates. They all manage to make a daring escape in the RV but are back to square one. Rick, Tyreese and Carl go hunting after their foraging in abandoned stores doesn't work out. But while walking through the forest Carl is suddenly shot by a stranger with a rifle. Rick proceeds to go insane.

With a roof over their heads and food in their bellies, Rick and crew seem to have finally gotten the opportunity to relax in this apocalyptic zombie hell-hole they call home. But now that their guard is down, disaster strikes, and Rick finds himself in a position no father or husband should be.

Retrieved from "https://imagecomics.fandom.com/wiki/The_Walking_Dead_Vol_1_9?oldid=54103"
Community content is available under CC-BY-SA unless otherwise noted.