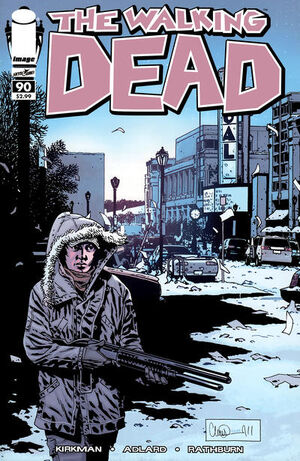 Rick defuses the situation with Nicholas and later Nicholas admits to Rick he was dissatisfied with digging ditches and lost control of his ego. Rick admits to Andrea that he wanted to kill Nicholas when he had his gun pointed at him. That would be a so much easier way to deal with the problem. He wonders aloud how he can get Carl to go back to being the way he was when he feels like he has died inside himself. Rick and Andrea share a kiss.

Retrieved from "https://imagecomics.fandom.com/wiki/The_Walking_Dead_Vol_1_90?oldid=15028"
Community content is available under CC-BY-SA unless otherwise noted.