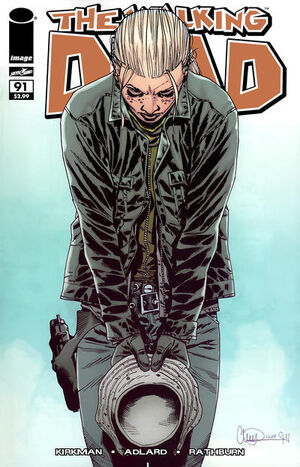 Andrea makes a hint to Rick about the two of them becoming a couple but Rick tells her it would never work. Andrea calls bullshit and Rick admits to her he cares about her. Everyone he cares about has died and he doesn't want her to die. Rick tells the compound they need to get serious about farming. Carl flares up to his dad about his head injury when Rick tries to console him.

Retrieved from "https://imagecomics.fandom.com/wiki/The_Walking_Dead_Vol_1_91?oldid=46249"
Community content is available under CC-BY-SA unless otherwise noted.