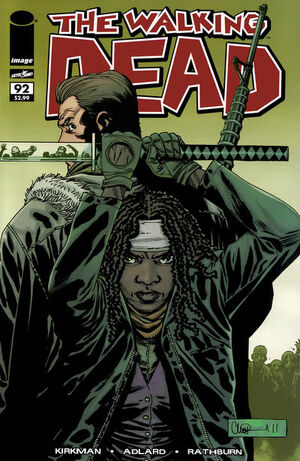 A roving scout named Paul from a neighboring community encounters Abraham and Michonne as they scavenge. Michonne points her sword at him and a fight breaks out. Paul disarms Michonne and holds her hostage while demanding to speak with their leader, but she gets away from him and he manages to take Abraham hostage. Michonne fetches Rick and Paul releases Abraham. Paul informs Rick there are three communities in the nearby area and that his community of two hundred people wishes to open trade relations.

Retrieved from "https://imagecomics.fandom.com/wiki/The_Walking_Dead_Vol_1_92?oldid=15030"
Community content is available under CC-BY-SA unless otherwise noted.