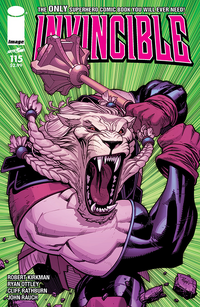 Battle Beast is a character in the Image Comics series, Invincible.

Battle Beast was once the planetary Guardian of his home planet. However due to the constant fighting, he would grow addicted to it and eventually leave to seek worthy combantants [2]

After leaving Earth, Battle Beast was imprisoned by a race conquered by the Viltrumites. Allen the Alien started a prison riot to rescue Nolan and ended up freeing Battle Beast. Battle Beast offered his aid to Allen only because it would satisfy his lust for battle.

Battle Beast was discovered by a Coalition search party, frozen by the vacuum of space. However, he was still alive and joined the ranks of the Coalition of Planets, though denying he was assisting. He would occupy a planet for the Coalition with a couple of squadron members [6] Battle Beast would go on to keep helping the Coalition until he is needed for the final Viltrumite battle. Thaedus would give a brief speech and they head off into planet Viltrum. On their way over there they are ambushed by a Viltrumite woman. Battle Beast hits her in the face with his mace and the Viltrumtes arrive for battle. He continues to fight her using her body as a weapon to fight other Viltrumites. He would keep fighting even after Viltrum's destruction although only briefly unconscious. He wakes up and launches into to Thragg, only to be tossed aside [7]

After recovering from his injuries of the Viltrumite War, Battle Beast goes into an unknown planet. The leader realizes how wrong he is after Battle Beast had slaughtered his regime. He bisects the ruler's head and his personal guards attack him. He easily kills them and Space Racer arrives to the planet with Allen's request to accompany him back to Talescria. Before he leaves, he takes a woman of the alien race with him after she begged him. He arrives to Talescria, leaving the woman in the lobby of the Coalition headquarters. He arrives into Allen's office, irriated by not seeing any battle in it. Allen reassures that his time will not be wasted. Allen tells Battle Beast facts about Viltrumite physiology, citing that they can hold their breath, but need to find a habitable planet afterwards. Battle Beast is intrigued, asks him why Allen's telling him this. Allen then informs Battle Beast of Thragg's exile and sends on him a mission to kill him. Battle Beast sadistically smiles and accepts the mission [8].

While having rough sex with his newly found mate, Thresha, he is interrupted by Space Racer who has discovered Thragg's location. Eager to face Thragg, he arrives to the planet. The planet is later revealed to be Thraxa, the planet that was occupied by Omni-Man, shortly after his betrayal. Thragg arrives to Battle Beast's location, asking if the Coalition had sent Battle Beast to eliminate him. Thragg begins to mock Battle Beast for being able to defeat him easily.

Battle Beast rebuffs him stating their contest wasn't finished and thus he can't claim victory. Thragg, confident in Battle Beast's ability, goes on to say that he is powerful and Battle Beast could have been a useful ally, but now he must die. Battle Beast states that it is true that he is looking for his equal and his better, he is not without honor and thus Thragg will die. Before they commence, the Ragnars are released by the alien woman. They attack Thragg, disemboweling him. Assured that the Ragnar would not be released until after his death, he becomes angry with her. The freed alien women begins to tell Battle Beast about how much he means to her.

Angered by the Thresha's betrayal, he begins to assist Thragg and kill the Ragnar. Thragg declaring him a fool to for assisting him. Battle Beast states that he won't let them interfere with their battle. After, Thraxans show up to assist Thragg, but Thragg tells them to leave. Battle Beast, then goes on to say he won't accept an advantage and cuts his abdomen, disemboweling himself. Calling him crazy, he goes on to declare his duty as the Grand Regent, and mocks Battle Beast for treating this like a game. Battle Beast rebuffs him saying that this is his life. There, they charge into each other and battle with Thragg having the initial advantage until Battle Beast catches him off guard by biting him [9]

Retrieved from "https://imagecomics.fandom.com/wiki/Thokk?oldid=66789"
Community content is available under CC-BY-SA unless otherwise noted.