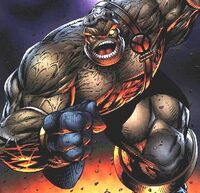 Thomas John McCall was an average under-achieving 16-year-old teenager. When he swallowed a vial of top secret genetic material in his father's lab, a startling transformation occurred and McCall's body became a mass of granite-like organic rock. He is 8'0" tall and weighs 1800 lbs. He possess super strength and a near invulnerable rock carapace. But inside this mountain-like hero is a gentle soul with a heart of gold. Badrock has a lot of power at his fingertips, but still is mentally immature. Later, Thomas assumed the identity of Badrock when he was recruited to join the high-profile government superteam, Youngblood. He is the super agent who gets paid big bucks and still answers to his parents.

Badrock is proficient with a number of weapons including the many guns and knives available to him in the Youngblood arsenal. Not one to hide behind gadgetry, Badrock often uses the incredible power of his fists to pummel opponents into submission.

Badrock is impulsive, having picked dangerous, property-damaging fights with the Savage Dragon and Mighty Man.

He also once visited Hell, confronting Spawn's old enemy the Violator. This was after being named temporary security head of a scientific installation that was investigating the realm of hell. He was more responsible at this point, trying to protect the many innocent people who had unwittingly made the trip to Hell with him. He had to deal with the interference of heavenly and hellish agents and the unwillingness of some of the humans to actually obey his orders.

When Youngblood was discontinued after the death of Riptide, Badrock took some time off. It did not last long though and through a series of events, he became part of the fourth incarnation of Brigade.

In the year 3000, Badrock was still alive and returned for a brief period of time to get some help from Youngblood to stop the Katellans. The continued presence of the Katellans to get Combat back led to the destruction of Earth, Katella and Acura in Badrock's timeline. Badrock had therefore returned to 1995 to prevent this from happening. The mission succeeded. What happened to Badrock after this is unknown.