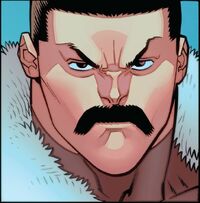 To all who make themselves enemies of the Viltrum Empire--! Prepare for your deaths!

Thragg was born on Viltrum. He was trained in all manners of combat and bred to be the strongest Viltrumite.[1] After their emperor, Argall was killed by Thaedus, Thrag fought in the Viltrumite civil war, meaning Thragg is thousands of years old. After the battle, The Viltrumites would emerge an unbeatable race led by him. Thragg would be granted the title of Grand Regent, tasked with finding the heir of Argall. He would keep Argall's skull as a reminder of what would happen were the Empire to fall into disarray. The Scourge Virus would be created and planet's population severely depleted and would make him believe that the heir had died. Afterwards, he would cease all attempts to find the heir, feeling that he had earned his place among them [2]

After Conquest failed to kill Mark, He had to face Thragg. Conquest begged for forgiveness with Thragg threatening to kill him. Seeing Conquest as still useful, Thragg sent Lucan, Conquest, and an unnamed Viltrumite to kill Invincible and anyone who’s aiding him [3]

It is revealed that Thragg has an inside spy in the Coalition of Planets, and has tasked him to take down the planetary barrier on Talescria [4]. Afterwards, he would speak to the skull of former Emperor of Viltrum, Argall. He states that Argall will be avenged after Thaedus is dead. He retreats from Talescria after Mark and Oliver destroy his warship. He rushes into battle, hoping to fight back, but decides against it. He and the other Viltrumties retreat to Viltrum [5]. When the Coalition arrives, he leads the Viltrumite charge. In the beginning, Thragg attacks Space Racer and Mark rushes to attack him.

Mark lands on blow on Thragg, but has no effect on him. He smacks Mark away for Oliver to attempt to attack him. He catches Oliver’s punch and dismembers his arm, while breaking his jaw, nearly killing Oliver in the process. Invincible, enraged, attacks Thragg with Thragg only getting a nosebleed. Thragg mocks him stating that he is in over his head and Conquest fears him. Mark reveals that he killed Conquest previously [6] and now he will kill Thragg. After Thaedus, Mark, and Nolan destroy Viltrum, Thragg becomes enraged and cries. Thragg angrily states that Thaedus destroyed Viltrumite heritage, history, and the planet itself. Thaedus offers him a chance to surrender, but Thragg refuses. He rushes towards Thaedus and decapitates him, and declares that Lord Argall is now avenged. Thragg declares that anyone who opposes the Viltrum Empire will die [7]. He rushes towards Mark and punches him.

Invincible attempts to hurt Thragg but to no avail. He punches Invincible’s temples until he is saved by Nolan Grayson. Thragg reveals to Nolan that Thaedus had killed Lord Argall with Nolan revealing that the Viltrumites deserve extinction for their crimes. Thragg headbutts Nolan, but is interrupted by Battle Beast. He throws Battle Beast to the side and grabs Mark and Nolan, attempting to smash their heads together. Nolan intervenes, hoping to allow his son to escape. He kicks Nolan and catches up to Mark, smashing his face in the process. Nolan catches up and Thragg impales him. Thragg decides to spare the duo, with much to Kregg’s confusion. Thragg states that the Viltrum Empire will need all Viltrumites. Kregg refuses to spare them, but Thragg stops him.Thragg and Viltrumites retreat to their warship [8]. Thragg reveals himself to Mark and Nolan on Earth, stating that Viltrumites are here. Mark attempts to fight Thragg, but Thragg suggest they talk. Thragg decides to surrender but on one condition, the Viltrumites take over Earth. Mark loses his temper but Thragg goes into detail about the takeover. Thragg states the Viltrumites will hide among humans and interbreed with them, replenishing their ranks. Thragg goes on say that the Viltrumite will not interfere with human events and the closest to pure-blooded Viltrumites are Viltrumite/Human hybrids. Mark refuses at first, but reluctantly accepts [9]. Thragg thanks the duo for ensuring Viltrumite survival and leaves, ending the Viltrumite War [10]

Thragg flies up to space after Allen and Oliver battle Mark [11]. He tells the duo that he knows about Allen’s plan to dispense the Scourge Virus into Earth and asks why he shouldn’t kill them. Allen reveals that he will use the Scourge Virus on him and Thragg states that he can kill him before the virus has effect. Thragg offers a truce to Allen and explains that them fighting is pointless because if he kills Allen, they’ll be back in the same place again. Allen hesitantly accepts with Oliver angry at Thragg. Their meeting is interrupted by the Guardians of the Globe and Robot attempts to capture Mark. Monster Girl attacks Thragg, but with no effect. Thragg knocks her away, nearly killing her. While the chaos, Oliver is able to grab the virus dispenser. They stop battling with Bulletproof wondering who Thragg is [12]. It is revealed that Mark has been infected with the Scourge Virus and Thragg takes him into Viltrumite quarantine. Thragg reveals to Cecil Stedman his agreement with Mark and that they have no choice in the matter. Thragg appears to the Guardians of the Globe and Dinosaurus. After Dinosaurus convinces Thragg that Dinosaurus’s genius is useful, he demands that The Guardians leave. Thragg goes into one of the observation room and a scientists tell Thragg that Mark is the grandson of Lord Argall. He kills the scientist and leaves to his quarters [13]

He is interrupted by Dinosaurus hacking and gaining access to his quarters. Thragg leaves to see Mark and attempts to kill Mark, not wanting to give away his title of Grand Regent. Dinosaurus unleashes a surprise attack on him, only breaks his claws in the process, and Thragg unharmed. Dinosaurus reveals that he sent explosions around the ship to correspond to his low heartbeat. Thragg pummels him and throws him aside after hearing an explosion. Dinosaurus attempts to bite Thragg, shattering his teeth in the process. Thragg breaks Dinosaurus’s jaw and flies to fix the explosion [14] He heads back and sees Atom Eve asking where Mark is. Eve attempts to battle Thragg, but Thragg laughs and directs her to Dinosaurus [15] After the invasion of London by the Flaxans, Thragg reprimands Kregg for interfering with the events. Kregg states that he is sorry but someone there carries his child. Kregg then reveals that he loves all dozen of his mates, much to Thragg’s disgust [16] Thragg calls a meeting of the Viltrum Empire and enforces that they are not to interfere with Mark and Dinosaurus's events or they will be killed by him [17]. Thragg would reprimand Lucan, Kregg, and Anissa for not obeying his orders. After being digusted with Lucan and Kregg's affection towards humans, he demands that they leave. Thragg arrives goes to the other side of the moon and sees Nolan with his wife [18] Thragg becomes enraged seeing him and rushes to attack him. While their battle continues, Thragg reveals to Nolan that he is Argall's son. Nolan refuses to fight him and Thragg severely injures him attempts to finish him off until he is interrupted by Kregg, Anissa, Lucan, and Thula. After finding out that Nolan is Argall’s son, they turn on Thragg and attempt to kill him until Nolan asks them spare him [19]. Thragg is then imprisoned and argues with Nolan. Thragg demands that Nolan kill him if he fears him. Nolan refuses and says that he will change the Viltrumites' brutal ways instead [20]. Nolan would sentence Thragg to exile, much to Thragg’s surprise [21].

After Thragg was sentenced to exile, he would occupy planet Thraxa due to his extremely long lifespan. He would also impregnate several Thraxan women in order to create Thraxan/Viltrumite hybrids. Knowing the Coalition will probably send someone to kill him, he is shocked to that Battle Beast is tasked with the job. Thragg goes on to say that Battle Beast would be a great ally if he wasn’t on the other side.

Their conversation is uninterrupted by the Ragnars being released. Battle Beast assists Thragg in killing them due to him not wanting an advantage. Thragg gets disemboweled by one of them and their battle is interrupted by Thraxans assisting Thragg. Battle Beast disembowels himself in to order to make their battle even, with Thragg mocking him. The duo charges at each other with Thragg having the initial advantage until Battle Beast bites him, causing Thragg's left eye is severally damaged [22] The battle been going on for days with no clear sign of who is the victor [23]

Thragg successfully kills Battle Beast. Before he dies, Battle Beast thank Thragg and Thragg crushes his heart. He succumbs to his injuries and loses consciousness. He is then transported by Thraxans off the planet. He would take many Thraxan warriors and women with him. He then has his left eye and gashed-open head patched up. Thragg would then have Battle Beast's hide torn off and wear it as a cape with a golden Viltrum Empire symbol over it. When one of the women asks how he is doing, he says that his health is improving [24]. On the run, Thragg, the Thraxans, and his many children roam the cosmos so that they can avoid Coalition detection. Space Racer detects him and Thragg kills several Coalition soldiers. While Space Racer runs, Thragg attempts to kill him [25].

While Mark was in his coma for five years, Thragg was rebuilding the ranks of Viltrum Empire and all of his children have reached adolescence. He makes a move on Talescria with having his daughter, Ursaal attack one of their major buildings.[26] Later, he breaks up a skirmish between his son Onann and Ursaal.[27] Oliver, acting as a double agent for Thragg, asks to meet him in person. Thragg, in the meantime, kills some Rognarrs in front of his other children, and then orders Onann and Ursaal to kill Mark Grayson.[28]. Thragg calls Oliver again to inform him that he has located Mark and that he will kill him and his family, despite Oliver's wishes. Thragg arrives and grabs Terra. As she struggles against Thragg, Oliver intervenes, allowing her to escape. After a short battle, Thragg impales Oliver and kills him in front of Terra. Mark holds Onann hostage asking that Thragg let him go. Mark kills Onann and begins attacking Thragg. Thragg gains the other hand and rips Mark in half while Ursaal seemingly kills Eve. He leaves Terra to die.

Retrieved from "https://imagecomics.fandom.com/wiki/Thragg?oldid=69192"
Community content is available under CC-BY-SA unless otherwise noted.