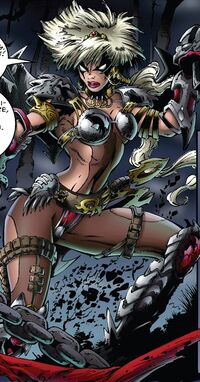 There's never been scores higher than mine in any of the flight levels.

Tiffany, much like her sister in arms Angela, is an angel from Elysium. Tiffany was jealous of the fame Angela received. Especially when she had higher grades and beat all of her high scores. Tiffany decides to head on a Hellspawn hunting mission without permission.[1]

She ambushed Spawn outside of West Virginia after he was weakened by Phillip Krahn. She attacked him and nearly decapitated Spawn, the only way to kill a Hellspawn without a heavenly weapon, but failed. Spawn called upon a Black Dispersal. The night creatures of bats, wolves, and bears surrounded the young Angel hunter and she was mauled until her physical body died.[2]

However, since Spawn failed to destroy her white light essence, Tiffany is still alive and continues to pose a threat to Cogliostro's warnings.

Retrieved from "https://imagecomics.fandom.com/wiki/Tiffany?oldid=64967"
Community content is available under CC-BY-SA unless otherwise noted.