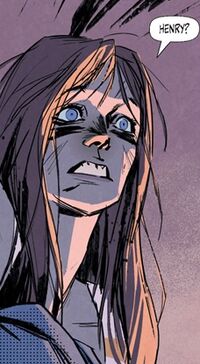 Tilly lived in a cult house led by David. Her son was born with one red, one blue eye and Henry was sent to retrieve him.[1]

Tilly and Vanessa soon convinced Henry to drive them to town to meet with Detective Pope, Vanessa's father. They told him they were scarred and wanted out of the commune. Pope agreed to investigate.[2]

Later, Tilly told Vanessa she's distract Henry and went to his tent to sleep with him.[3] When Vanessa had her child, Tilly helped and stayed by her. One night, Tilly prepared them to escape and Vanessa surprised her by announcing she changed her mind and wanted to stay on the commune.[4]

Retrieved from "https://imagecomics.fandom.com/wiki/Tilly_(Sons_of_the_Devil)?oldid=44954"
Community content is available under CC-BY-SA unless otherwise noted.