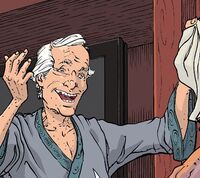 Timothy Honeycutt was a presidential candidate who ran against Jack Northworthy. He bought votes to beat Jack even though he was the popular favorite. When Jack discovered the treachery, he murdered Tim in his hotel and told his constituents they worked for him now.[1]

Retrieved from "https://imagecomics.fandom.com/wiki/Timothy_Honeycutt_(Citizen_Jack)?oldid=55880"
Community content is available under CC-BY-SA unless otherwise noted.